Sahmra A. Stevenson is the founder of S.A. Stevenson Law Offices, with offices located in Columbia and College Park, Maryland, where she and her staff are focused on fighting for happy families one day at a time.  Ms. Stevenson approaches her work with a philosophy that whole and complete families begin with whole and complete people. Her practice focuses on the areas of family law litigation, estate planning, and small and family business law services.

In 2016, Ms. Stevenson launched Wills On Wheels, Inc., a mobile estate planning business serving the residents of Maryland. Owned and operated by S.A. Stevenson Law Offices, LLC., the progressive business model is a part of the Office Without Walls, trademark, brand, and initiative created by Ms. Stevenson.

In addition to providing mobile estate planning services, Wills On Wheels, Inc., plays an active role in the community by offering free presentations educating families and youth about the importance of financial and end-of-life planning, preserving property interests, and financial literacy.

Office Without Walls ™ is a business model, blog, and online resource established for the purpose of making legal services more accessible to all (www.OfficeWithoutWalls.org). By advocating for a mobile platform through which clients can better and more readily access the legal services they need, and sharing her experience with other practitioners, Ms. Stevenson hopes to break down old and outdated concepts about how law can and should be practiced.

Sahmra has received several awards and accolades, including an induction into the Maryland Bar Foundation in 2014, and recognition as a Rising Star by Super Lawyers for both Maryland and the District of Columbia in 2016, 2017, 2018 and 2019  The Super Lawyers Rising Stars list recognizes no more than 2.5 percent of attorneys in each state.  Sahmra has been recognized in two jurisdiction, for four (4) years and counting. 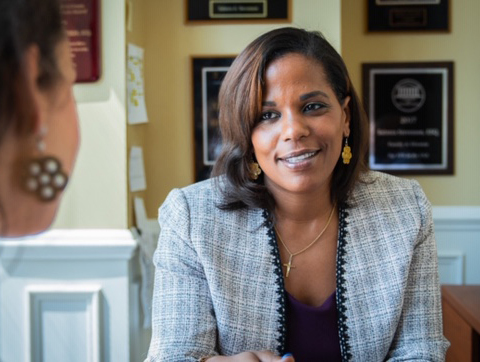 Sahmra is passionate about her role as a public servant. She has worked with attorneys in Maryland to combat exploitive labor practices endured by immigrant workers in Maryland forming the group, “Maryland Attorneys Working Against Labor Trafficking” (MDAWALT) as a way to educate attorneys and non-attorneys on labor trafficking and employment issues, and provide valuable resources to the vulnerable population.

She also volunteers her time and skills as a mediator to help resolve foreclosure disputes and utilizes her expertise as a custody attorney by providing pro bono litigation services to immigrant children seeking asylum and Special Immigration Juvenile Status (“SJIS”) in Maryland. As an artist herself, she considers her work with Maryland Volunteer Attorneys for the Arts to be amongst the most important of the volunteer work she does.

Sahmra graduated from the American University Washington College of Law (“AU WCL” or “WCL”) with a Juris Doctor in May of 2010. While matriculating at Washington College of Law Ms. Stevenson worked for judges in both D.C. Superior Court and the D.C. District Court.  She also served as a Rule 16 student attorney with the Anne Arundel County State’s Attorney’s Office where she litigated cases at both the District and Circuit Court levels. Upon completion of her second year at WCL Sahmra was one of six law students in the country selected by the NAACP to participate in the 2009 NAACP/Kellogg’s Law Fellow Program.

During her second year of law school, Sahmra was selected to serve as a part of the Marshall Brennan Constitutional Literacy Deans Fellow Project, teaching a year-long course in Youth Justice and Constitutional Literacy to tenth through twelfth grade students at Wilson High School in the Northwest D.C. After graduating Ms. Stevenson worked for the Honorable Judge David W. Young in the Baltimore City Circuit Court where she oversaw a criminal felony docket before starting her own practice.

Ms. Stevenson has also developed creative ways to give back to her peers in the profession. A prime example is the launching of her monthly newsletter “After Work Networking” in May of 2011. The electronic publication was an assemblage of free and semi-free events in the local area as well as a listing of local volunteer opportunities that was disseminated to readers once a month. During the four years that the newsletter was active Sahmra’s readership grew from six to almost six-hundred before production was suspended.

In addition to her work as attorney, Ms. Stevenson pursues her second passion which is painting and furniture making and in 2014 launched a website (www.artbySahmra.com) and a greeting card line that she is still working to get off the ground. When she is not painting she enjoys competitive long distance running and she has completed a total of six full marathons and seven half-marathons in five different states since 2012.

Sahmra April Stevenson is a graduate of Tufts University in Boston, Massachusetts where she received her B.A. in History and American-Studies and studied as part of a combined degree program with the School of Museum of Fine Arts Boston.  During her time at Tufts Sahmra was selected as one of twenty University College Public Service Scholars assigned to help develop community based projects throughout the Boston area.  As a scholar Sahmra successfully designed and implemented an after school program at East Somerville Elementary School titled Better Faster Stronger Athletes (“B.F.S.A”) which provided education about fitness and nutrition to fourth through eighth grade students.  The program is still in existence to this day.

In addition to her work as a University College Public Service Scholar, Sahmra served as Director and Program Coordinator for NIA, a local non-profit organization dedicated to mentoring and tutoring youth in the local community.  After graduating from Tufts, Ms. Stevenson accepted a position at Wilmer, Cutler, Pickering, Hale & Dorr, LLP where she worked for nearly two years before enrolling in law school.

As a proud member of the American Bar Association since 2012, Ms. Stevenson has served in the following esteemed roles:

On the local level, Ms. Stevenson is an active member of the Maryland State Bar Association (“MSBA”) and served as one of fourteen 2013-2014 MSBA Leadership Academy Fellows. In 2013 she was selected as the recipient of the 2013 MSBA Rising Star Award, and in 2015 she graciously accepted the Melody Tagliaferri-Cronin Distinguished Service Award for her work with the Young Lawyers Section.

Ms. Stevenson has served in the following leadership roles with thee Maryland State Bar Association since 2011:

Separately, Ms. Stevenson has also served as Chair of the Social Media Team for the Committee to Elect the Sittings Judges of Prince George’s County since fall 2017.

In addition to maintaining her blog and YouTube Channel where she discusses the importance of practicing wellness, the benefits of remote work, living a healthy lifestyle and making opportunities to travel and move around, Ms. Stevenson is a frequent speaker at events throughout the country:

Sahmra has been published in the following places:

We give you personal attention

We fight to protect your legal rights

We provide accessibility to justice!

“I’m glad to say I had Sahmra Stevenson as my attorney. She was knowledgeable, made things easy for me to understand and communicate with her, and always kept me informed. I was able to trust her with my case and I’m satisfied with my cases outcome. I would have her again as my attorney if needed.”

Our team is committed to being of service to our clients and to the community. With a focus on Family Law Litigation, Father's Rights, Estate Planning, and Small and Family Business Law, our team approaches every case with a philosophy that whole and complete families begin with whole and complete people.